Before coming to Taylor Zach served as the Associate Pastor of Students/Education at First Baptist Church of Merkel, TX. He has a BBS in Church Ministry from Hardin-Simmons University and a MA in Family Ministry from Logsdon Seminary.
An Okie by birth, Zach started following Christ at FBC of Seminole, OK. Zach moved to New Mexico in elementary school. During his time at FBC of Carlsbad, he felt a call to ministry; that call has led to his current ministry position today. Zach and his wife, Suzi, were married in 2003. They have a son, Jackson, and a daughter, Hannah. 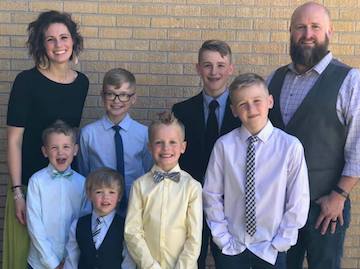 Brandon Davis serves as the Associate Pastor for Families and Students at Taylor Memorial Baptist Church. He married Leanna in 2003 and they have six boys: Tristan, Peyton, Kohen, Grayson,  Lincoln, and Ronen. Previously, Brandon served as a lead pastor, student pastor, and family discipleship pastor at several churches in Texas, including First Baptist Church of Beaumont and First Baptist Church of Fairfield. Originally from Fairfield, Texas, Brandon has a B.A. on Biblical Studies from Criswell College, and has completed masters work at Grace School of Theology. Brandon is passionate about families, discipleship, and hunting.

Elio Barrios serves as the Congregational Care Pastor. He leads our Spanish-language ministries, including conversational Spanish and ESL classes, Spanish-language translation of the worship services, and Spanish-language Bible studies. He also coordinates our mission outreach in Guatemala.  Elio has served in New Mexico churches since 1984. He has pursued training in biblical studies in Guatemala and at Golden Gate Baptist Theological Seminary. He loves to serve and is very active in the community.

Krista is a Lea County New Mexico girl from Lovington.  She felt the Lord's calling to work with the next generation while a high school student at her home church of First Baptist, Lovington.  She has a BA in Religious Education from Wayland Baptist University and a Masters from Eastern New Mexico University.  Krista has served as a North American Mission Board Student Missionary in British Columbia Canada and has helped lead Vacation Bible School clinics through the Baptist Convention of New Mexico.

Ray Smith serves as Director of Senior Adult Ministries at Taylor Memorial Baptist Church. He was born in Wingate, Texas, and raised in Clovis, New Mexico. Ray was saved at the age of 10 at Inlow Youth Camp and baptized at First Baptist Church, Clovis, New Mexico. Ray attended Hardin-Simons University and Eastern New Mexico University. He was ordained as a Deacon in 1951 at Pierce Street Baptist Church in Amarillo, Texas. He was married to Jo (now deceased) and has three children, six grandchildren, and eight great-grandchildren.